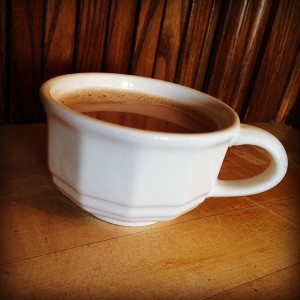 Recently, while setting aside some things that need to be packed away, and while unpacking some boxes that had not been opened since I left Ohio, I had the realization that a great portion of my life can be recalled through coffee mugs. This small white cup, for instance, saw heavy use in Findlay most recently, and if you ever had coffee or tea at the Curry House, chances are good that you’ve held… one of these. But this is actually from the first set of coffee cups I can remember. I can still recall my great grandmother sipping her coffee from one many years ago (I must have been 8 or 9 at the time). It was Thanksgiving, and she called me aside later in the evening to talk to me specifically. She wanted to tell me about prayer, and how important it was (I think she was a Roman Catholic, but whatever specific strain of Christianity she held to, she was very devoted and very spiritually minded); she told me that God would always be there and would listen if I just took the time to talk to him–and though it seemed strange at the time, and most of my mind was probably elsewhere, I still remember it to this day when I see this coffee cup. It was the last time we had a conversation before she died.
Originally published on Instagram @ajcoffman – April 11, 2014