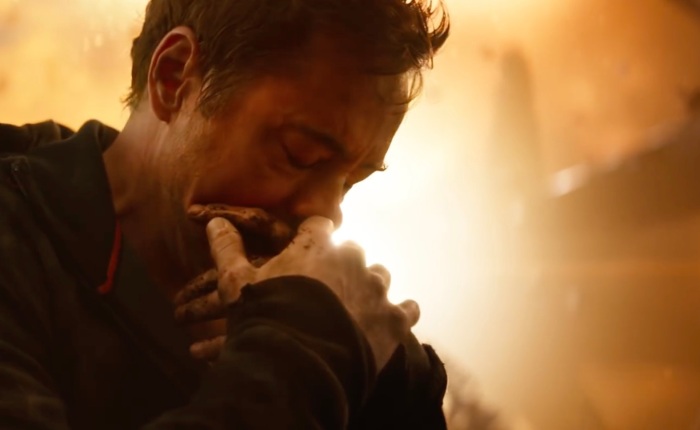 There are no spoilers in this review!

As you have probably surmised already, I decided to take a small break from reviewing classic films this week in order to take a look at a new movie that has just opened in theaters across the world – Marvel’s Avengers, Infinity War… I don’t know if you’re supposed to put a comma or a colon after Avengers, so please forgive my janky grammar usage. That’s not the point. The point is, that 39 year old Adam has been waiting for this movie since 12 year old Adam first read the comic book. As a kid, I loved reading, and I loved making up stories, so when I discovered comics it was like striking gold. During that phase of my childhood, Dad would take me to the comic book shop almost once a week, and I would excavate my way through the giant white boxes like I was pick-axing through a mine. I loved it. And even though that time eventually passed, I will always remember it with a deep appreciation for my dad who took the time to drive me into town and buy those comics for me. Thanks, Dad.

Back in the early to mid 90s, Marvel had been going through quite a financial crisis. The comic book market had reached a place of astronomical sales in the few years prior, and then all the sudden, with little warning, came crashing down in a tremendous implosion that crippled the entire industry. I think there were a few factors that contributed to this – nerds and geeks have been speculating on the causes ever since, but my opinion is that it had something to do with the perfect storm of full market saturation of home PC usage, the internet coming online in millions of households across the U.S., and The Simpsons reaching the height of their cultural influence. I’ll concede, that last one is probably a bit of a stretch, but there is a character in The Simpsons known as ‘Comic Book Guy,’ who made us real comic book guys (and gals), look bad – and no one wanted to be THAT GUY (or THAT GAL). Anyway, the result, when you put all these things together, and remember that the Seattle grunge scene was also blowing up at the time – was that comic books were no longer universally cool. They burned brightly at the peak of their coolness for a few moments, being enjoyed by millions, and then like MC Hammer and Milli Vanilli, their coolness cooled out. And like those cultural phenomenon, they were once more relegated to being enjoyed in secret by a faithful few.

When the comic book market finally did crash, Marvel was hit the hardest, and having significantly over-extended its supply, they were on the brink of complete bankruptcy. So, in a last ditch effort to salvage what was left, they began selling the movie rights to their characters, one by one, pimping out their most sacred heroes to the all consuming, ever greedy movie industry in Hollywood. Spider-man was sold to Sony Pictures, the X-Men and the Fantastic Four were sold to 20th Century Fox, and several other deals were made as well, including one which involved the Incredible Hulk being temporarily leased to Paramount. They were carved up and served like Christmas hams, and when it was all over, Marvel was left with the bones in the center that nobody wanted. Those bones were the characters who were left – the rejects, the outcasts that the studios had decided were unprofitable and useless on the big screen. And what did Marvel do with these leftover bones? They did the only thing anyone can do; they made soup beans. And the result was something that few expected. Characters that were previously considered un-filmable, like Captain America (a poor attempt at making a Captain America film in 1990 only strengthened the conviction that he was doomed on the big screen), Iron Man, and Thor, were given complete cinematic overhauls, and made into movies that connected to contemporary audiences (unfamiliar with the source material) while remaining true to the deep historical and cultural roots of the characters that had given joy to their fans across several decades. They were made the right way, by the right people, and the box office success has since been reverberating long afterward with the same gusto and jolly goodness with which a good bean soup reverberates through the night and into the next morning.

At the helm of Marvel’s renaissance has been a man named Kevin Feige. When Feige became the head of Marvel Studies in 2007, he crafted a plan that was long-term. He didn’t just want to make a few movies about a few characters, he wanted to create an entire cinematic universe, involving several characters, each with a handful of movies, all tying together into one over-arching story, leading to one grand finale. This began 10 years ago, with the release of Iron Man, and has since continued with an astounding 19 films. Avengers Infinity War (split into two parts) is the culmination of this decade long endeavor. The success of Feige’s plan cannot be overstated. He not only helped to rescue Marvel from bankruptcy, but he has slowly re-built its reputation, and introduced these characters to a new generation of young fans, while satisfying old fans (like me) who dreamt of seeing these movies when we were kids. Along the way, and with the help of Disney who bought Marvel in 2009, he has given Marvel the clout and financial ability they needed to re-acquire most of the licensing rights to characters they had sold off – including the amazing Spider-man, a cornerstone of the Super Hero genre.

As for the actual story of Infinity War — with a few twists and turns, and minus a few dozen characters, it was taken almost directly from the pages of what was originally a 6 part mini-series of comics released in 1991 called Infinity Gauntlet. Written by Jim Starlin, this was a special run of comics, made with the primary purpose of gathering as many characters as possible into one storyline. Marvel had done this before with its Secret Wars series, so the concept wasn’t entirely a new idea, but instead of having all the heroes square off in a royal rumble with all the villains, it had all the heroes square off with one super duper ultra mega-villain of villains called Thanos. In order for the writers to outdo all previous attempts at creating a super duper ultra mega-villain, they made the Devil (the actual Devil, known as Mephisto in the comics) Thanos’ lackey side-kick, and the destruction of half the universe the mission that he’s trying to accomplish in order to impress his girlfriend, who is Mistress Death. I’m not sure how much pot they were smoking back in that writer’s room, but it must have been the good stuff, because they came up with some ideas that were beyond the realm of bonkers.

The movie takes many of these ideas and makes them slightly less fantastical, and more grounded in reality – as much as that is possible anyway. But the real strength is the characters, and the care that has gone into developing them. If they had tried to release Infinity War in 2008, or even after just a few years worth of Avengers movies, I don’t think it would have worked at all, and the outcome would have been drastically different. But because they took their time, and slowly introduced audiences to these characters one bean at a time, the result is a well-seasoned soup that brings together many flavors that we’ve had time to grow accustomed to and appreciate. However, if you haven’t seen any of these Marvel films, Infinity War will seem like a stitched-together mess of over-bloated madness and a confusing jigsaw puzzle of chaotic battle sequences (in which case, I do not recommend watching it first). If you have been following the films since 2008, then I’m sure it will have its intended emotional impact. I found myself being pushed and pulled all over the emotional spectrum while watching it. I laughed, I shed a few tears, my heart sank, and I had to get up and pee twice because of adrenaline rushes… or the Diet Coke I was drinking… not sure which it was. Either way, and even with my familiarity of the source material, it still left me feeling shocked at the end, and having no idea how it will all be concluded a year from now when part 2 is released.

This story, in general, is a difficult one for me to analyze. I find it tricky to do this with any story or character that I was introduced to when I was a kid. They were planted in the soil of my young brain at a time before my critical and analytical thinking was developed. I just enjoyed them. I didn’t give them much thought. I knew they were stories about good versus evil, and (unlike the newer stories of today) it was easy to tell the difference between the good guys and the bad guys. But time has changed things. We need our fantasy stories to be more real these days, and in real life, the lines between good and evil are all too often blurred in the chaos of human existence. In the Infinity Gauntlet comics it was easy to see Thanos as the cut and dry bad guy that he is. We didn’t get much insight into his thought process. But the version of Thanos we get in the Infinity War movie is slightly different. We’re given a full explanation for why he seeks to gain power, how he plans to use it, and the logic behind it. We know he’s still the bad guy, but we’re made to sympathize with him just a little bit – and we’re given the information we need to see from his point of view. He’s not portrayed as an angry madman trying to blow up New York City or take over the world, but as a broken, grizzled soldier, who has experienced immense tragedy, and is responding the only way that seems reasonable to him. Along the way, his conviction and resolve to complete his chosen task is sufficiently tested, and he is forced to weigh the consequences of his actions. The good guys, on the other hand, are bitterly divided, shattered by their own weaknesses, their own failures, and the harm they have done to each other unintentionally. They are forced to face their enemy as a fractured team, without the strength that they could bring to bear if they were united. Even though it’s an epic fantasy, with millions of dollars worth of special effects, computer conjured backdrops, and creatures that don’t actually exist, there’s something painfully real about that sentiment.

I sometimes wish I could go back to being a kid again, before these stories were so complicated… before they were so real.