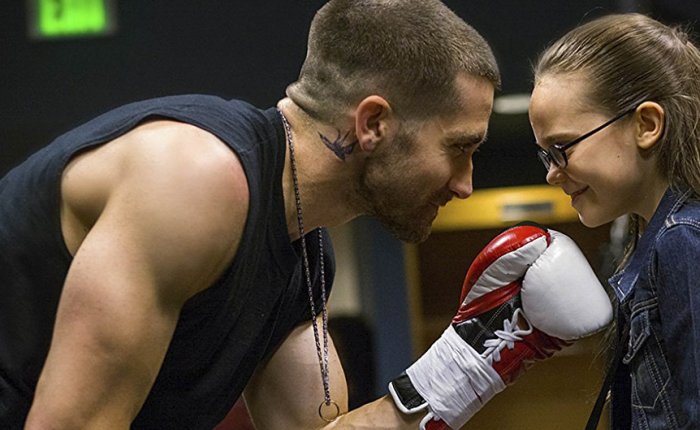 Karlie Crouch’s pick for our group’s Thursday Night Film Time this week was Southpaw. I had not yet seen this one, but Antoine Fuqua has been one of my favorite directors since Training Day back in 2001, and his follow up – Tears of the Sun in 2003. His most defining characteristic is being able to deftly genre-jump his way from project to project, each time applying his craft to an entirely different category of film. He’s dropped a few stinkers along the way for sure (2004’s King Arthur with Clive Owen for instance), but Southpaw isn’t one of them. Released in 2015, it’s a recent entry into his catalogue, and with the writing chops of Kurt Sutter (Sons of Anarchy), he’s brought all of his accumulated film experience into the boxing genre.

Of course, when it comes to making a boxing film, any director and screenwriter has to, at some point in their process, honestly contend with the fact that they’re treading on sacred ground that was long ago bought and paid for with Stallone’s blood, sweat, and tears. Sutter seems to have made a career out of trampling on holy ground, but in this case he’s much more careful with his screenplay. He doesn’t completely abandon the classic elements that made the Rocky saga great, but pays subtle homage to them while also injecting his own brand of tragic realism into the genre–and Sutter’s realism is very dark. Combined with Fuqua’s vision, the result is an experience that drags you down down down into a pit of despair as you watch the main character spiral into a black hole. But it doesn’t leave you there! (Manchester By The Sea, I’m looking at you – 😫)

Jake Gyllenhaal plays Billy Hope, the reigning boxing champ who is on top of the world. Without giving anything away, something happens to him about 20 minutes into the story that is the sitting-comfortably-in-your-home equivalent of receiving an unexpected uppercut to the jaw. It’s in that moment when you realize, ‘Oh, this isn’t Rocky.’ Thankfully, the story doesn’t end at this point, and you get to watch as this damaged character is slowly dismantled, re-arranged, healed, and put back together – mostly by Forrest Whitaker – the aging trainer/mentor figure. Whitaker (Tick Wills) is at his finest as he ambles from quiet discourse to energetic pep talk to loud bustling exclamations of woe and regret – all punctuated by an array of facial expressions that say more than his actual words. The meat of the story is the process by which Tick steadily hammers away at Billy’s hard outer shell in order to fully reveal the chaotic mess that’s inside him. Once this happens, Billy Hope is able to piece together a redemption story that can only really begin with his full acceptance of his own mistakes. He has to learn how to embrace responsibility for his own downfall, his own weaknesses, and how he has played a role in hurting those closest to him. The enemy he fights in the ring is a reflection of the enemy he fights inside his own heart and mind. Both fights are brutal, both fights are desperate, and both fights are metaphors for the kinds of battles that we all, as human beings on this planet, must face every day, in our own ways.